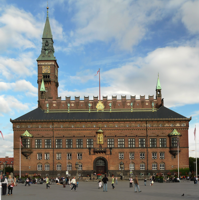 The society was formed to give a permanent home to the International Organizing Committee (IOC) for IRMMW-THz, to formalize the role of the IOC in maintaining the current conference series, and to link technically with JIMT. In addition, the Society administers the Kenneth J. Button Prize, awarded annually for outstanding contributions to the science of infrared, millimeter, and terahertz waves and theIRMMW-THz Exceptional Service Award. The current membership of the IOC can be found here and general information on the conference series – including applications to host the conference, Society By-Laws, nomination procedures for Society prizes and more can be found at the society web page: www.irmmw-thz.org.In 2016 the conference was held in Copenhagen, Denmark, for the first time from September 26 to 30 at the Bella Center, Copenhagen.